A brief history of Cumbria

In 1974, Cumberland, Westmorland and part of Lancashire were amalgamated in the face of bitter controversy, to become Cumbria.  Outsiders tend to think of Cumbria only as the Lake District, but those 866 square miles of outstandingly impressive scenery are by no means the only parts worth exploring. There are an enormous variety of landscapes and seascapes throughout the whole county.  It is a land of lakes and tarns, peaks and fells, vales and rich pastures, a land veined with rivers, streams and waterfalls; a land whose mood changes as often as there is a change in the weather. 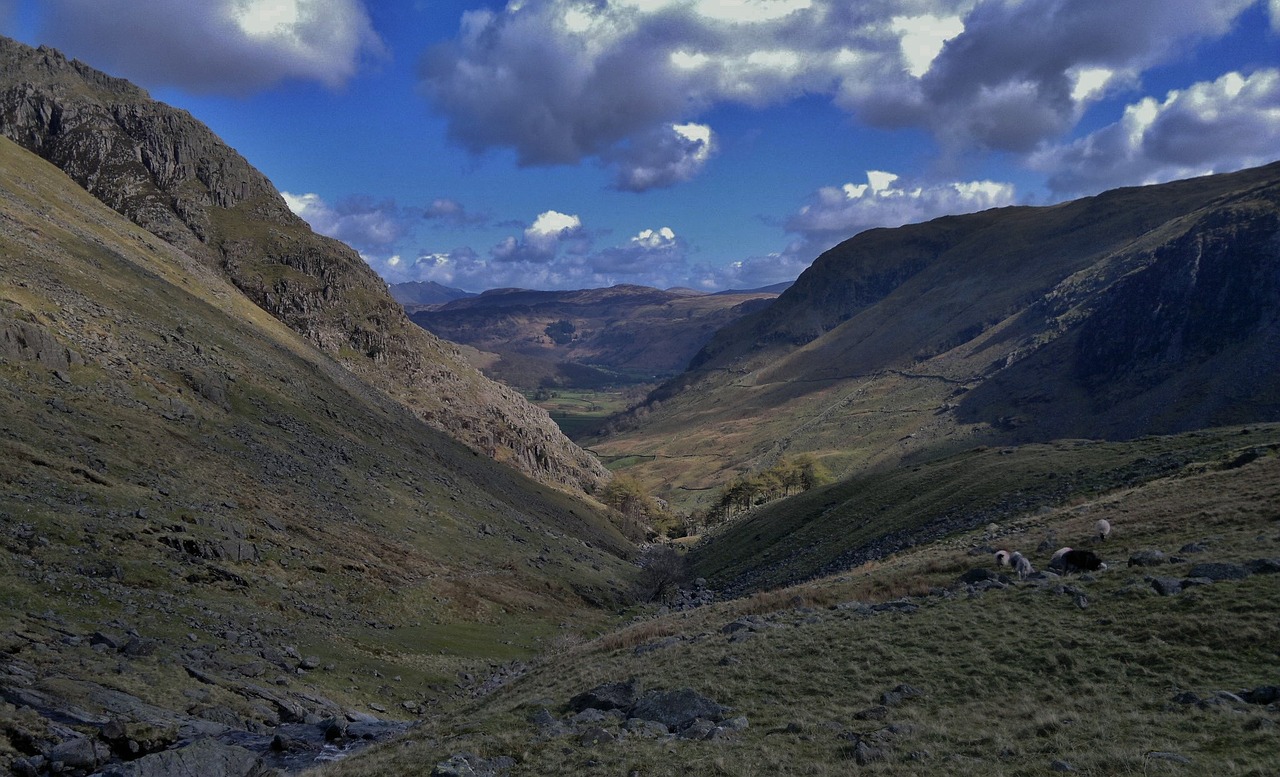 Long, narrow valleys radiate from a central dome of mountains like irregular spokes of a wheel, separated by high, craggy ridges.  These valleys open onto a fringe of lowland, falling away to the Solway Firth, the west coast, the sand flats of Morecambe Bay and wide vale of Eden. Remote villages nestle among fells and bleak crags; narrow lanes wind between dry-stone walls and moorland dotted with sheep.  Gardens display a riot of colour: rhododendrons, azaleas, hydrangeas, clematis and roses, overhung by great copper beeches and ancient oaks.  Visitors to Cumbria will always remember the sound of water: flowing over stony beds, cascading and thundering over rocks and precipices, dripping from trees after rain.  They will remember the belling of stags, heard across the lakes in the rutting season, the bugling of swans, the haunting of geese in a winter sky and the pruck of the raven, rarer now than when he gave his name to so many local places.
Cumbria's history can be traced back as far as the Mesolithic settlements of 4500 B.C. (If there was any human activity before that, it was obliterated by glacial erosion in the Ice Age).

Cumbria's history can be traced back as far as the Mesolithic settlements of 4500 B.C. (If there was any human activity before that, it was obliterated by glacial erosion in the Ice Age).  Later, Neolithic settlers left evidence of their advanced technical progress: the floor of a stone axe factory was discovered at Stake Pass in Langdale in 1947 and another below Pike o' Stickle.  These stone axes would have been used to clear large areas of the natural forest for cultivation.  The later Iron Age tribes, led by powerful chiefs, were constantly at war and some hill forts date from this time. Roman domination, from A.D. 47 until the fifth century left many marks on the countryside: as well as Hadrian's Wall, with its chain of forts and mile-stations, there is High Street - a high fell ridge between Ullswater and Haweswater with a Roman road along the top - and traces of several other Roman routes.  Numerous Roman artifacts have come to light over the years, some of which are now in museums and a great many of which are incorporated into churches and houses built by succeeding settlers.

Bounded to the north by the hostile Scots, to the west by the ocean and to the east and south by mountains, Cumbria was isolated.  The people looked on themselves as a separate race and mistrusted strangers.  Wool, mining, iron and wood industries, particularly the manufacture of charcoal, have all contributed to Cumbria's development. Most of the trees from the original natural forests were used to feed the greedy iron furnaces that were an essential part of the mining and were an essential part of the mining and iron industries and almost all the present trees have been planted since.  Some of the most beautiful woods, such as those by Derwent water and on the shores of Windermere, were planted for effect rather than for timber.  The chain of towns in the west sprang up from the prosperous mining industry that flourished in the last century.  Towns and villages that are now holiday resorts were once busy ports crammed with ships, their docks and wharves live with the bustle of maritime trade.  After the slump of the 1930s, some of these almost became ghost towns, but new industries are now bringing them back to life. Tourism plays an increasingly important part in the economy today.

The Lake District, in the heart of Cumbria, has attracted poets and writers over the ages.  Some are almost household names now; others, less well known, have also contributed a great deal to English literature.  Wordsworth was perhaps the best known of the Lake Poets, an abstemious, good man who immortalised so much of Cumbria in his vast collection of simple, romantic poetry.  He was appointed Poet Laureate for the last seven years of his life.  Coleridge lived in the Lake District for a while, struggling with opium addiction and marriage problems.  His sad, failed son Hartley, who died there, was befriended by Wordsworth. Southey, Coleridge's brother-in-law and Poet Laureate before Wordsworth; Ruskin, the art critic and passionate social reformer; De Quincey, another opium addict; the children's books author Beatrix Potter; Hugh Walpole, whose Herries Chronicle was set in Cumbria; Arthur Ransome, whose swallows and Amazons played out their adventures on Coniston Water: all these and many more were inspired by the Lake District.  Others were frequent visitors: Walter Scott, whose works are peppered with Cumbrian scenes and references, Keats, George Eliot, Shelley, Charlotte Bronte, Emerson, Matthew Arnold and Tennyson, to name but a few.

Cumbria has everything to offer-from hill-climbing, walking, pony-trekking to all the different water sports, as well as sight-seeing.  The coast is ideal for family seaside holidays, with rocky cliffs and sheltered harbours, sand dunes and good beaches.  The rich tidal flats of the Solway Firth and Morecambe Bay - famous for its shrimps - attract a large number of sea birds.

Things to do in Cumbria?

Place to visit in The Lake district

Looking for somewhere to eat?