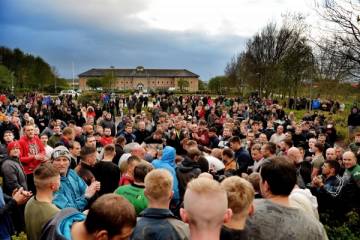 SPONSORS of a traditional mass football game are devastated after cancelling the event because of the coronavirus pandemic.

It's the first time the much anticipated Uppies and Downies match won't be played in its 350 year history.

The decision was announced by Jamie Beaumont, one of the organisers of the charity events that follow the games.

A charity night at the Railway Club in aid of West House has been postponed.

Robert Daglish, who sponsors the second game of the the three-match series, said in a statement on Facebook on Saturday: "It is with great regret and sadness, and much consideration that my son and I have decided that the Easter Tuesday ball with not be thrown off.

"I realise many people will be disappointed with this decision and so wish it could be different.

"We decided that it would be very irresponsible to try to play the game on this occasion with the Covid-19 virus so prevalent.

"We cannot risk someone coming into contact with a carrier and go home to a child or parent or grandparent, the consequences could be literally fatal.

"It’s not a decision which sits easy with us.

"It is, as far as I’m aware the first time in some 350 years we will not be playing.

"The sadness at this predicament is raw.

"At the same time, it would be tragic if we were to witness and be part of adding to the pandemic.

"We also considered delaying the game till later in the year but that still,wouldn’t continue the tradition.

"And the logistics behind such a move would make it unworkable.

"In the end we decided to wait until Easter next year with a new ball and concentrate on being able to play the game and not worry about the virus."

The Uppies and Downies mass football game is one of the oldest in the country.

The first recorded game was reported in the Cumberland Pacquet in 1775.

Even then it was referred to as "long contended".

The game is played over three nights during Easter, at Good Friday, the Tuesday after Good Friday and the series final on Saturday.

Players often stay in families where it becomes a generational tradition.

Workington is only one of a handful of places to still do an annual ball game.

Every year at 6.30pm a specially made ball is ‘scopped off’ from long bridge at The Cloffocks.

There is no finish time and the game is only over when the ball has been ‘hailed’– which often takes hours to achieve.